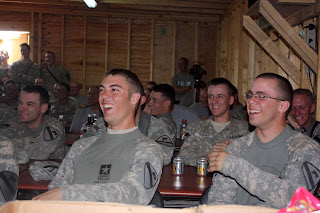 In March I fulfilled one of my stand-up comedy goals: a tour to entertain the troops serving in Iraq and Kuwait. Having served in the region twice before as a U. S. Marine, during this Iraq War and The Persian Gulf War, the comedy tour took on even more meaning. Being Jewish added another layer: I was a Jew in an Arab country. More importantly, I was glad to let the troops know that this New York Jew, although a transplant from New Mexico, supports them and their mission.

The comedy tour was with fellow comedians Scott Kennedy and Steve Mazan. Kennedy, a childhood friend from summer camp and military boarding high school, was on his twenty-seventh trip. And Mazan, a former U. S. Navy submariner, was on his seventh trip. Generals Petraeus and Odierno have told Kennedy that the comedy tours are actually saving lives. I agree. You need an outlet when deployed. That outlet is laughter.

When we arrived on base in Kuwait, we were issued a helmet and flack jacket. We wore these on every flight, and on the ground if the enemy threat level dictated.

We were taken on a tour of holy sites in Iraq and ended up at what is believed to have been Abraham’s house. The first and last twenty-four hours of the tour were spent in Kuwait. On the last day it was Purim. A U. S. Army Rabbi stationed there asked me to do a spot at their celebration. I did and then stuffed my face with humentashen.

For the first show, on a base in Kuwait I had been to before as a Marine, I was more nervous than usual. Should I do Jewish Marine or not? How many Mel Gibsons are out there? I went for it… Material worked. During my set, the loud speakers played the Muslim call to prayer. I incorporated it into my act. It “killed.”

The next day, we flew on a C-130 to Baghdad. The aircraft was hot and cramped. Upon arrival, we quickly dropped our bags and headed to the helicopter-landing zone from where we were flown to our first show in Iraq.

Everyday, Blackhawk helicopters flew us all over Iraq to large and small bases. From above, we saw Baghdad’s bustling traffic. Some days we did three shows, some days we did only one. A few shows were canceled due to being “dusted in” or for logistical reasons.

The crowds at our shows ranged from as little as forty to as many as five hundred. After every show we signed autographs and shook hands. I silently wished that I would never see any of them at a Wounded Warrior show. I tried to tell every one of them to “kick ass and be safe.” We must have shaken hands with over a thousand troops. After the show, we’d visit the troops in the guard towers who weren’t able to see the show.

After a show, a young army soldier told me in his thick southern accent, “You’re the funniest Jew I’ve ever met.” It meant a lot. Not as much as if this kid spoke in a New York accent and worked in the biz… But it was still nice to hear.

We arrived on a base 3km from the Iranian border. We were told that a patrol had been attacked five hours prior and they’d had to medevac a few guys out. “We could really use some comedy now,” they said. The show went well. The guys laughed. For a snap shot in time, they were able to put their worries and stresses aside, I hope.

As we flew away, I thought that whether I ended up in the region again as a Marine or as a comedian, nothing would take away from one of the most meaningful experiences of my lifetime, entertaining the troops in a combat zone.